y'all know I love a good crock pot recipe.  or slow cooker.  I think they are samers.

so, I wanted to share two new fave recipes from real simple magazine.  one is called creamy chicken and biscuits.  yep.  tastes as good as it sounds.  I followed all of these directions, but I made my mama's homemade biscuits instead of their easy drop variety (which I am sure are delish).  I don't have a recipe for mom's biscuits...the ingredients include self-rising flour, butter flavored crisco, and buttermilk. and you mix them up until it "looks right" as she says.
really hope one of you makes that recipe...so yum...and should make anyone happy.

the second new fave recipe is asian pork with snow peas, red pappers, and soba noodles.  I made this one tonight for deener (that's the way my sister sarah and I say it) and we all loved it.  except, charlotte made me eat her snow peas because they were "too spicy", which makes no sense, but she is so cute I just ate them for her.  eden crunched those peas up.  I didn't have soba noodles so I used whole wheat angel hair pasta.  this junk smelled so good cooking that I could hardly stand it all day long.
the only thing I did differently than the recipe advised was that I put the red peppers in the crock pot when the meat had about 45 minutes left to cook.  just because I don't love a crunchy red pepper.

the second two are songs.  my beautiful friend jenni played this song I'd never heard during communion time at church yesterday.  I couldn't stop crying.  which was bad.  because I had to sing the next song with the worship band and start it off all by my lonesome.  I was able to compose myself...but it sure wasn't easy.
LOVE her voice!!  love those words.
once I found out who the artist was I listened to a millionty jj heller songs on youtube today.  I think I've listened to this one called "kingdom come" 47 times today.
well, at least 12 times.

and lastly.  a new favorite picture of eden.  it just captures this side of her personality so well.  she is an artist in many ways.  singer, songwriter, actress, painter, crafter. 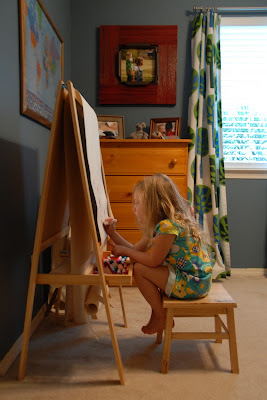 happy cooking, song listening, singing, and picture taking to you.
Posted by Abby at 10:11 PM

LOVE that pict of eden, beautiful girl! Also love me some jj heller! One of my voice students did "your hands", it never gets old. Have you heard "tonight"? I sang it at a wedding for their first dance. sweet song. Love you, love your heart. Love your little boy who's waiting for you... Can't wait to swap boy stories with you :)

I love JJ Heller! I discovered her last year and downloaded her entire album right away! And that pic of Eden, I just can't even find the words.